The Great Push returns for the final time in Shadowlands! The Raider.IO Recruitment System is now in public beta! 🥳 Get started now to recruit players, find your perfect guild, or build a Mythic+ team. 👀 🔍 🥰
Recruit Now

Refreshing in NaN...
LIVE
Sep 4 2022 22:34 UTC
Seliathan
The Great Push is over, and we had an amazing weekend here while watching the teams compete and push keys that most of us would've thought to be completely impossible. We saw some of the best teams from each region perform and challenge each other and themselves, and thankfully it was an incredibly close race all the way until the end!

Echo takes home the victory, after 3-chesting all their keys and having an incredibly low depletion rate in all of the dungeons. Besides some minor technical issues, they seemed almost unbeatable and ultimately take the TGP championship. Not only did they lead the competition throughout the entire weekend, but they had better timers in almost every single dungeons, often being over a minute faster than the competition.

Monka claims second place, and has shown us once more that even titans can bleed. They certainly gave Echo more than just one scare this time around, just like during their first showing at the last MDI. Despite some very unfortunate depletes and missed 3-chests by just a handful of seconds, they came back strong on the last day, getting a +37 Junkyard done on their first attempt, as well as Iron Docks, Streets, and Upper Karazhan. This team will be a blast to watch going into Dragonflight.

Ambition had an incredible start into their first two days, being the only team besides Echo to really show how important it is to be consistent and faster than everybody else when playing up the keys. They faltered a bit on their initial pushes into the highest level of keys, but after some analysis and practice, they managed to get them done faster than even Echo and Monka. Their +37 Junkyard was an incredible comeback after failing it multiple times the previous day.

Besides our Top 3, we also have Zhixu Gaming, Team Performance, and Donuts and Disbear, who all showed incredible plays and runs as well. Team Performance still has everybody baffled about how they could possible do their +37 Junkyard this fast. A special shoutout certainly has to go to both ZhiXu Gaming and Team Performance, who were playing this event at 1AM-6AM local time the entire weekend, after having had their Qualifiers during regular playing hours last week.

Last but not least we have Donuts and Disbear, who managed to not only compete with the best of the best from the EMEA and Chinese region but almost eliminated some of them on Day 1 already. Hopefully this finally ends the debate about NA not deserving more than a single spot!

Thanks everybody for joining us for our coverage, we hope you had as much fun watching and cheering on the teams as we did. Let's all hope we won't have to wait too long for the next Mythic+ event, so we can all enjoy our beloved 5-man content together once more.

Thanks for reading and watching, have a lovely morning/day/night wherever you are, and see you in Dragonflight!
Sep 4 2022 22:24 UTC
picc0
WE HAVE A WINNER! After 3 days of absolutely awesome gameplay and the gf affix, Echo made it, congrats!
Let's check Twitter land and what is going on there:


We also have some more from our other teams and friends:


GGs to all teams, you showed an impressive performance, thank you! And with this, we say goodbye and thank you and take care! <3

Also a big thank you to the casters, who did an amazing job! Until next time! 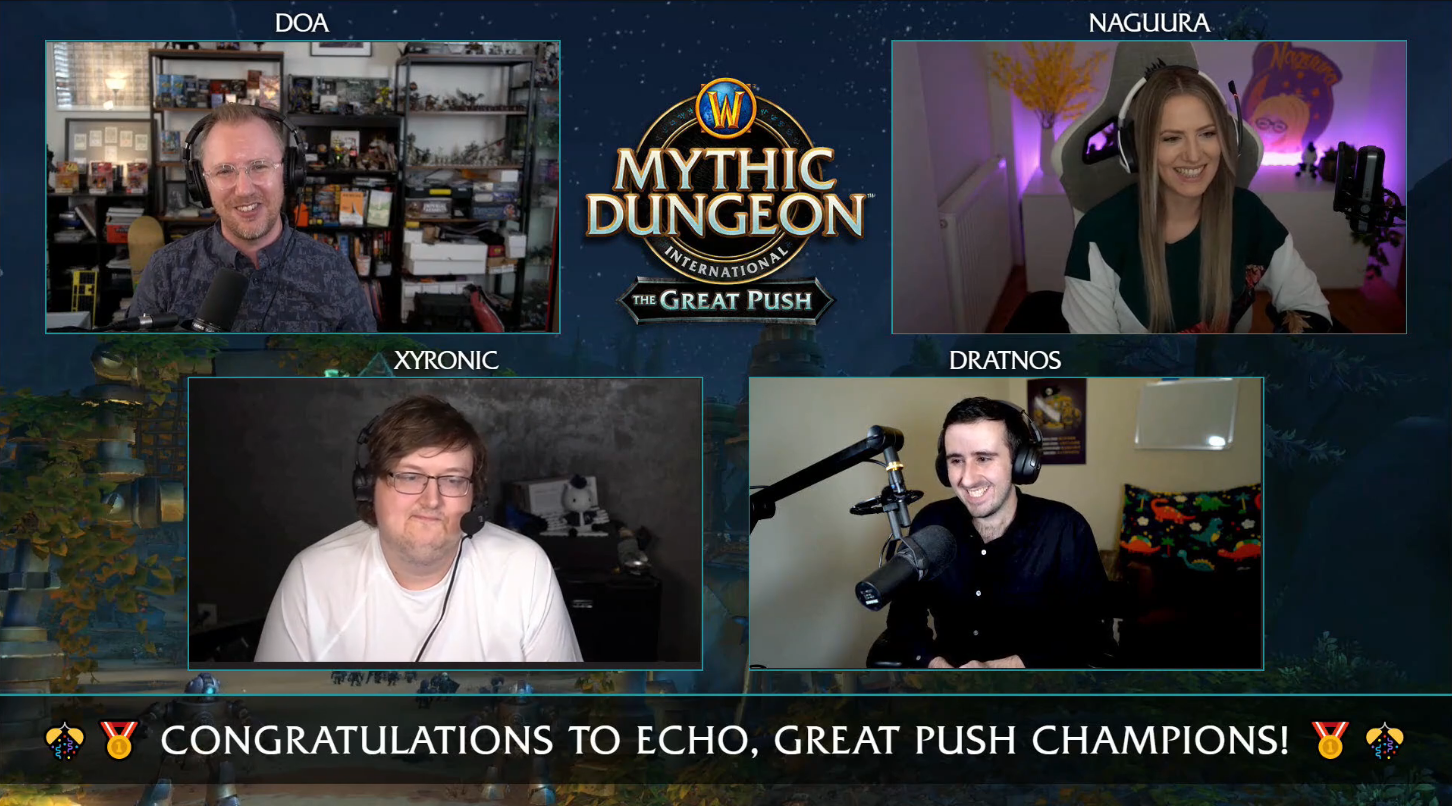 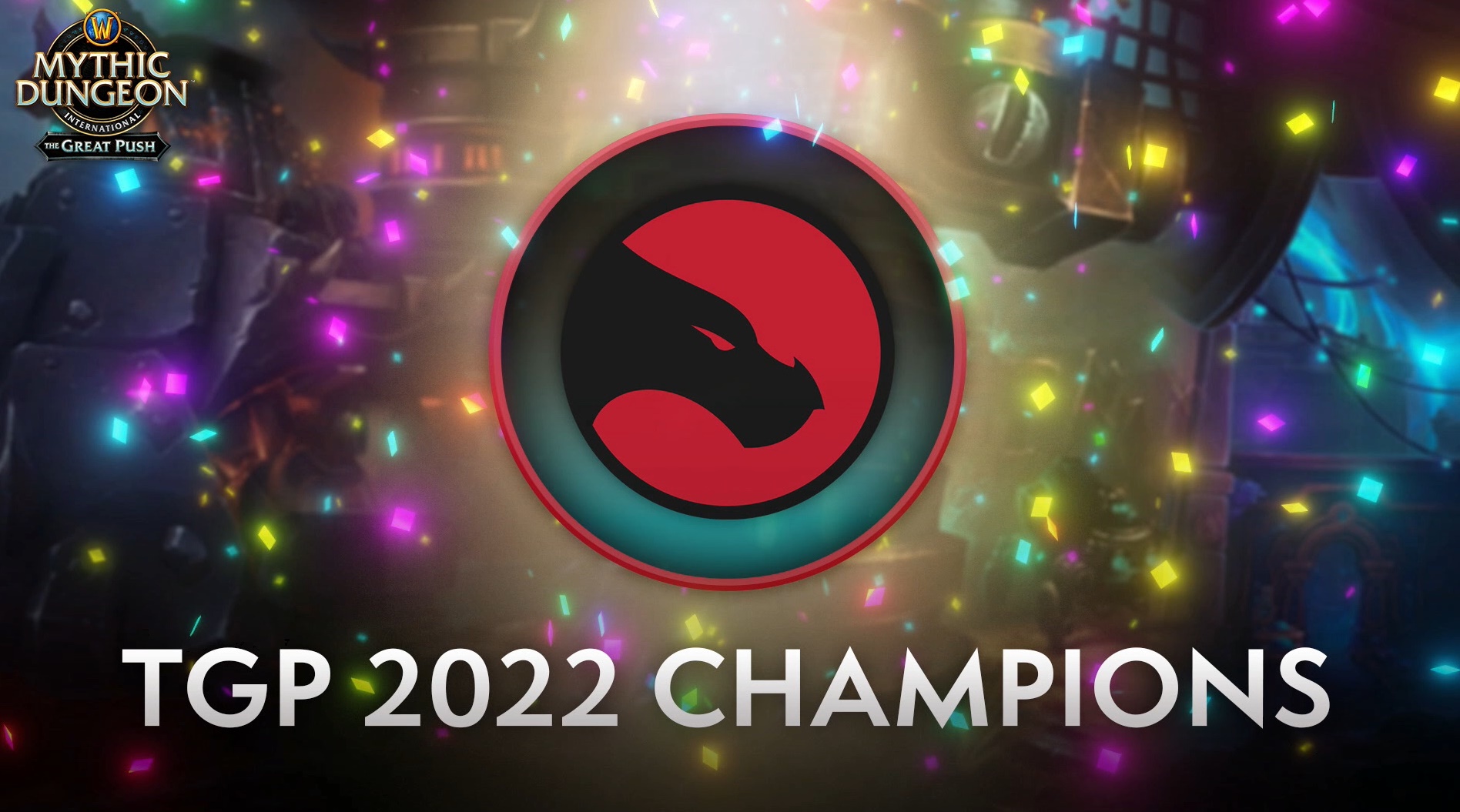 Echo takes home the victory, after an absolutely astounding performance throughout the entire event. Despite some smaller issues, including a disconnect in their +37 Junkyard, they take home the championship in the Season 4 Great Push Global Finals.

Congratulations to Echo. Well played Naowh, Zaelia, Clickz, Meeres and Gingi.
Sep 4 2022 22:16 UTC
Seliathan
Echo does it! They time the +33 Soleah's Gambit, while Monka at the same time wipes to Hylbrande, getting another set of Orbs and already being over 13 and a half minutes into their run.

The time has ended now to start new runs though, so this has to be the one.
Sep 4 2022 22:01 UTC
Seliathan
Echo kills Hylbrande about 30 seconds slower than they did on their +32, which is pretty much expected due to the key-level. Having an entire 3 minutes extra in their +32 means they can drop 30 seconds on each boss and still have plenty of time to finish this +33.
Sep 4 2022 21:57 UTC
Seliathan
Both Monka and Echo are at Hylbrande now, with Monka opting to play Zulgamux while Echo does not. Echo ends up pulling the boss almost an entire 2 minutes faster than Monka.

Monka pulls some Guardians with the boss and ultimately wipes on it, after making a weird observation...

Maybe Zul'gamux wasn't the only reason for this time difference.
Sep 4 2022 21:52 UTC
Seliathan
Ambition gets their +37 done just in time to start another key. This puts them ahead of ZhiXu Gaming to take over the third place, and Ambition almost certainly has the time-tiebreaker. While they are no longer able to catch up to Monka and Echo, they came through at the end and got themselves a very strong +37 Junkyard, a key they looked very weak in up until this run. They managed to make up over 5 minutes from their previous runs, which is absolutely incredible.

Ambition can start and time another key now, although it won't make a difference for the placements anymore as Ambition and ZhiXu Gaming have the third and fourth place pretty much locked in now.
Sep 4 2022 21:43 UTC
Seliathan
Echo wipe on one of their Murloc pulls and have to reset the dungeon. The same happens to Monka as well, so both teams will be tied on their start once more.
Sep 4 2022 21:40 UTC
Seliathan
Echo is looking to go back into Soleah's Gambit on +33, same as Monka.

We have a few possible situations here now: