Refreshing in NaN...
LIVE
Jul 31 2021 06:40 UTC
Starym
We have a top 20! Reload Esports are the final of the best 20 guilds in Sanctum of Domination as they down Sylvanas Windrunner EU 9th!

This will also end our coverage of the race, and it's been an amazing one to say the least! While Sylvanas may not go down in WoW history as one of the best or even better bosses, the raid race and streaming overall proved to be possibly the best yet. With the end especially being incredibly tense, and the win coming down to basically 0.6%, as the two guilds often raced literally side-by-side on the same boss % at the same time on both streams... damn it was good! The Sanctum also provided enough thrills on its own, if perhaps a somewhat broken difficulty curve, but we'll see what the players have to say about it all soon as our interviews with the top teams start! We'll be posting news of those here as well.
Jul 29 2021 18:46 UTC
Starym
Only 1 more to go! The World 19th, Asia 5th has arrived and Chao Jie down Slyvnas as well!
Jul 28 2021 23:04 UTC
Starym
We're nearing the top 20, as three more guilds have finished up the Sanctum! FlashPoint KTB, Mate and Memento claim the World 16th-18th and are 10/10!
Jul 28 2021 03:15 UTC
Starym
Two more 10/10s as we move to the top 20, with JiTianHong and MNM take the World 14th and 15th on Sylvanas!
Jul 27 2021 20:49 UTC
Starym
Echo have a special treat for us, with a cinematic World First cinematic kill video!

Jul 27 2021 05:13 UTC
Starym
Another Sylvanas down! Soniqs Imperative take the World 13th and US 4th! Congrats!
Jul 26 2021 19:33 UTC
Starym
12! Impact get the Banshee down as well, claiming the Eu 6th along the way.
Jul 26 2021 17:18 UTC
Starym
The top 10 (and 11) is completed! Skyline and Alpha have now also downed Sylvanas, Asia 2nd and third! Congrats!
Jul 26 2021 08:18 UTC
Starym
We have a huge chat between Echo and Complexity-Limit, as Co-CEO Rogerbrown and GM Max talk for 5+ hours on basically EVERYTHING Sanctum of Domination related! From comps to every single individual boss, what they thought would be good pre-raid, the crazy Sylvanas adjustments each made, whetehr we'll see two more raids in Shadowlands and a LOT more.

Jul 26 2021 00:17 UTC
Starym
FatSharkYes also down Sylvanas, claiming the World 9th and EU 5th! Congrats!
Jul 25 2021 18:42 UTC
Starym
Club Camel are the next ones to down Sylvanas! World 8th, US 3rd! Another huge step up from the last tier, as they jump 9 spots! Congratulations.
And they even did it with only one player left alive!

Jul 24 2021 22:45 UTC
Starym
Another Sylvanas kill arrives and it's a big one! Aster have claimed the Asia first and world 7th in the Sanctum of Domination race! Congratulations!
Jul 24 2021 20:58 UTC
Starym
And here's a very interesting article on the actual stream views of the Sanctum race, as Max was the most watched by far. Make sure to check out the full article with even more stats over at Streamcharts. 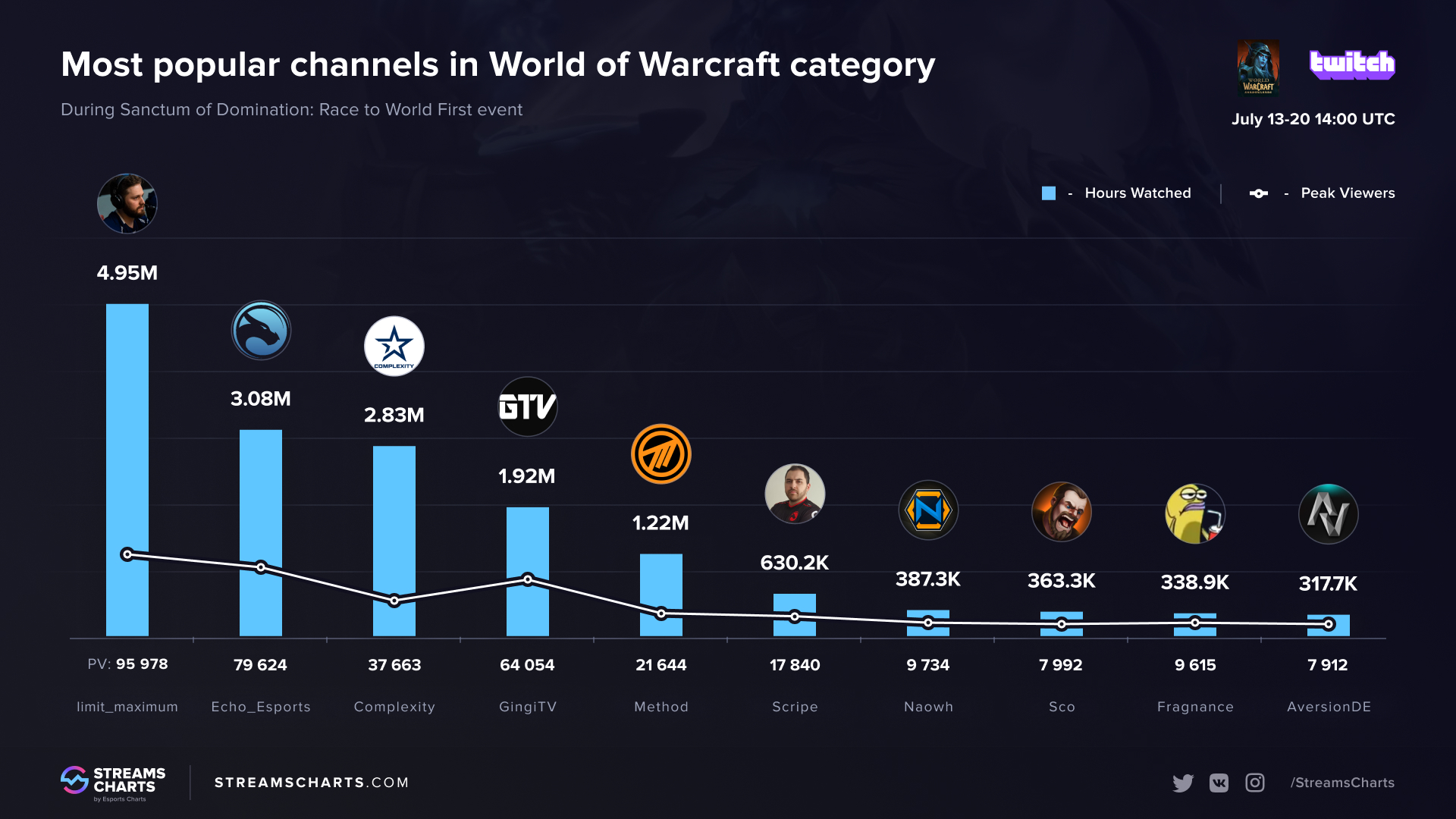 The Raider.IO Recruitment System is now in public beta! 🥳 Get started now to recruit players, find your perfect guild, or build a Mythic+ team. 👀 🔍 🥰
Recruit Now
Raider.IO
Community
Looking for a guild? Ludicrous Speed is looking for raiders!